Prevention Magazine . February, 2006
What your partner’s shortcomings can teach you

When I’m stressed-out, I tend to get irritable, short-tempered, and a tad sarcastic. If my husband, Gordon, says, “Hey, honey, do you want to go to a movie later?” I might reply, “Sure, how about sometime in the next century when my work is finally done?” In past relationships, my snippy behavior has occasionally caused hard feelings. But with Gordon, it’s not a problem. He loves and accepts me even when my best self is temporarily MIA. Rather than interpreting my remark as an attack, he sees it as a call for love and support. His compassionate response—often just a heartfelt hug—usually helps me put down my work for a few minutes and focus on him.

We all have less than sterling traits, and so do our loved ones. Learning to view them in a more understanding light is one of the best Valentine’s Day gifts you can give your partner. According to the late University of Washington psychologist Neil Jacobson, PhD, cofounder of integrative behavioral couples therapy, accepting each other’s flaws not only increases intimacy and relationship satisfaction, but it also has a hidden bonus: When no longer pressed to change, a third of partners finally do, research shows. As my mother used to say, you catch more flies with honey than with vinegar. Another surprising dividend for the accepter, by the way, is a peaceful heart—whether or not the other person changes.

Over the past 15 years, as I’ve facilitated a hundred or more workshops for women, I’ve heard the same complaints over and over. Here are some of the most common flaws women see in their partners, along with my advice on how to come to terms with them.

If a man is capable of building a house, launching a rocket, or fixing a car, many women wonder, why can’t he change a roll of toilet paper? Or wipe the kitchen counter? You don’t need a PhD to know that women tend to do more housework than men do. But Brown University research found that “inequity in the division of household labor has a greater impact on distress than does the amount of household labor.” In other words, his unwillingness to pitch in probably bothers you even more than the mess he makes.

But beyond pointing out the crumbs in the bed and asking nicely for help, what can you do? First, try humor. When the toilet paper runs out, my friend Loretta LaRoche suggests hanging a roll around your neck like a pendant and hiding the rest. If your husband asks where the toilet paper is, reply, “Well, I don’t know where yours is. I’ve got mine.” Next, consider paying someone to clean your house if you can afford it. Finally, try reframing the situation. If you’re distressed by dusty knickknacks and cluttered closets and he’s not, he’s clearly not sweating the small stuff…and you are. That’s a particularly male form of balance, but maybe you could learn from it.

Usually, women are more open and talkative than men, although there’s a spectrum of communication styles in both sexes. Research by Ronald F. Levant, EdD, of the University of Akron, suggests that boys and girls are born with the capacity to be equally expressive but are socialized differently. Mothers tend to expose baby girls to a wider range of emotions than baby boys, and they work harder to control their sons’ emotional volatility; fathers speak in more emotional terms with daughters than with sons. This kind of research can turn anger into empathy: Maybe the man in your life became the silent type because he was discouraged from expressing vulnerable emotions.

But you shouldn’t interpret his silence as a lack of interest in you. If you trust that he really loves you, perhaps you can notice how he communicates his love nonverbally. Going out in the snow to brush off your car or taking you to a restaurant when you need a break is a legitimate way to say I love you. My friend Martha once spoke wistfully of her quiet but loving ex-husband: “Hal was a great man,” she said. “He was just a lousy woman.” Had she accepted him as he was and sought all the caring talk she needed from her girlfriends, their marriage might have survived.

When my son Andrei was born, I was expecting a big bouquet from my then-husband. Instead, he came to the hospital with the potted philodendron from our kitchen window. My hormones were already in an uproar, but the disappointment of not getting flowers after 12 hours in labor sent me over the edge. I was furious. He, on the other hand, couldn’t understand the big deal. He knew that I loved the philodendron and thought I’d enjoy its company. And flowers just wilt, so why waste the money? His parents had immigrated to the United States when he was 7 years old and had supported their children on very little. My husband’s frugality was a way of ensuring that our growing family would always have enough, too. When I realized that, I stopped carping at him.

Julie, a former client, was married to a minister named Tom. He worked long hours and often talked to parishioners in the evening. Julie felt like everyone else’s needs trumped hers, and she joked that it was no picnic being married to Mother Teresa in drag. One day, we were talking about forgiveness—that it was less about condoning someone else’s behavior and more about transforming the forgiver into a more compassionate person. Julie took that conversation to heart. Instead of blaming Tom for being too busy, she decided to honor and support his special spiritual gifts. As it happened, Tom felt so cared for that he found ways to lighten his schedule and spend more time with her.

Learning to love your lover’s flaws doesn’t necessarily mean that he’ll change his behavior. But you will definitely change. You’ll develop more trust, intimacy, and compassion—and in learning to accept your lover’s imperfections, you’ll eventually get better at accepting your own.

See Flaws in a New Light

Mind Body Practices for Improving Self-Regulation and Restoring Psychological Health
The Spiritual Art of Memoir: Discovering the Invisible Thread of Grace
The Mystic Heart: The Neuroscience and Experience of the “ecstatic spectrum”
Self-Healing in Santa Fe
View All Events 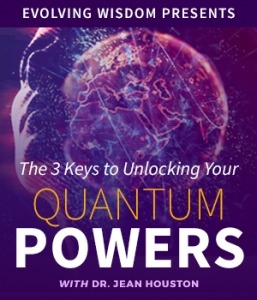