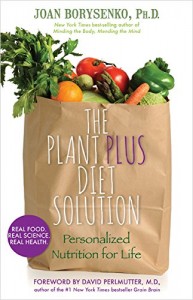 One diet does not fit all, says Joan Borysenko, PhD, author of the forthcoming book The PlantPlus Diet Solution. But there are a few smart food choices that most people can benefit from. In this month’s feature article, Joan looks at the confusion surrounding low-fat diets, explains the biology behind our individual dietary needs, and offers five principles for healthy eating that apply to just about everyone.

Ever since President Dwight D. Eisenhower was diagnosed with heart disease in 1961 and put on a low-fat diet, reducing dietary fat—while increasing carbohydrate intake—has become nutritional dogma, in spite of some sketchy research. Yes, the rates of heart disease have gone down, but experts don’t think that diet was involved. Less smoking, better emergency medicine, more long-term care, fewer cases of rheumatic fever, and healthier moms who bore higher birth-weight babies are the likely causes of the decrease in heart disease over the past 50 years.

On the other hand, the very dietary changes that were put in place specifically to reduce the incidence of heart disease—which still claims the lives of one in four Americans—ignited an epidemic of obesity, diabetes, and Alzheimer’s disease instead.

We’re at a turning point where the children now being born in the United States are the first generation whose lifespan is on track to be shorter than that of their parents. Ironically, one of the culprits may be the way we’ve been instructed to eat for the past half-century. One single medical recommendation—to eat low-fat foods—spawned a high-carb feeding frenzy that may be the single most expensive mistake ever made in the name of evidence-based medicine.

I’ve worked my way through a veritable mountain of medical science to ferret out reliable research. I have a doctorate in medical science (cell biology) from Harvard Medical School, so by training—as well as by instinct—I’m an inveterate diet sleuth. When my husband, Gordon, was diagnosed with coronary artery disease and I was diagnosed with early-stage heart failure in our 60s, we decided to investigate the effect of food on what ailed us. Both of us were fit. We’d long eaten a diet of organic, nutrient-dense foods. What was the problem? And what might the solution be?

Our first diet experiment was consuming an ultra-low-fat vegan diet, which had been shown in the 1990s to reverse coronary artery disease. President Clinton is a poster child for the efficacy of this kind of diet. He’s slimmed down and avoided any more cardiac events, a great outcome. Unfortunately, for Gordon and me, this didn’t work. After 14 months on an ultra-low-fat vegan diet, my blood pressure went through the roof, and I ended up on three different meds. Gordon’s blood lipids went south in a hurry, and he developed metabolic syndrome. To add insult to injury, both of us gained weight. That unexpected result got my research antennae quivering. What was the problem?

The answer is simple: One diet does not fit all. About half of us are genetically suited to thrive on a relatively high-carb, low-fat diet. The other half needs a higher-fat, lower-carb diet. And there are other variables that determine what we need to eat.

In brief, we all have three genomes: our regular genes that we inherit from our parents; our microbiome, the bacteria that we co-habit with and their genes; and the epigenome, the control panel that turns genes on or off in response to environmental changes, which range from the effects of stress, trauma, and emotions to the kind of foods we eat.

Unless you hail from an ancestral culture like the Inuit, whose metabolism evolved to burn meat and blubber, or an African hunter-gatherer tribe that lives largely on tubers, fruits, leaves, and the occasional bit of meat, you—like most of us—are a mongrel, with genes that developed to digest foods native to several different locales.

Our mongrel status suggests that we’re best off eating a diet that is plant-based, with additions and subtractions based on our own three genomes. These additions are what I call Plus Foods. These range from dairy to eggs, grains to fish, meat to soy. The foods that you are best off eliminating are Minus Foods, which come from the same nutrient groups.

Gordon and I, perhaps because we both have similar Eastern European ancestry, have Plus and Minus Foods in common. We get bloated and gassy and develop metabolic disturbances when we eat soy, beans, and grains—Minus Foods for us. We thrive on eating dairy, fish, meat, and eggs, our Plus Foods.

No matter how you personalize your diet, you can guard your health and that of your family by abiding by a few basic food rules:

The Diet Sleuth Looks at Nutrition Bars
Scroll to top